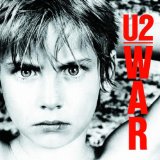 War was the third LP to be released by U2. It came out in March 1983, and signalled their emergence as a mainstream band when it entered the british chart at number one, dislodging Michael Jackson in the process ("It couldn't happen to a nicer guy" - Bono). Constant touring throughout the UK, mainland Europe and the US ensured that there were enough loyal fans out there to ensure that 'War' was a success.

The feel of this LP was totally different from the two that had gone before. Raw guitars, pulsating drums and a pounding bass from Adam combined to produce an album that could stop you in your tracks. Bono actually described the tone of the record as being "like graffiti". Steve Lillywhite was again at the controls, which was unusual as he was normally reluctant to stay with one band for any more than two LPs. However, it proved impossible to find anyone more suited to the task, so he was persuaded to stay. Fellow Island Records artists The Coconuts (Of Kid Creole and the Coconuts fame) sang backing vocals on Red Light and Surrender, which was the first time that guest vocalists had appeared on a U2 record.

Even the cover was a symbol of how the band had moved on. It featured a more 'aggressive' picture of Peter Rowan, the same child who had earlier appeared on the cover of 'Boy', only now older and no longer so 'innocent'. The sessions which produced this picture also yielded the eventual cover for 'The Best of U2 1980-1990'. As an interesting footnote, Peter has gone on to be a professional photographer himself.

'War' gave U2 their two most successful singles so far, ie New Year's Day and Two Hearts Beat As One. These brought a whole new audience to the band, and when a british tour was announced to promote the LP, it sold out before it kicked off, thus proving that "success" was at last being achieved.

This LP was more political in nature than the two that had gone before, and signalled U2's intention to be a band that was prepared to speak out on major issues. The white flag image of the 'War' era symbolised the LP's peaceful message, while certain songs dealt with some controversial topics. Sunday Bloody Sunday in particular addressed the Northern Ireland situation, but was misinterpreted by some as a republican "rebel song". Hence Bono's intro to the song on Under A Blood Red Sky : "There's been a lot of talk about this next song, maybe maybe too much talk. This song is not a rebel song, this song is Sunday Bloody Sunday."

There were more signs of spiritual and religious influences on 'War'. The lyrics of two songs (Drowning Man and "40") are taken, at least in part, directly from the Bible. Drowning man draws on the words of the book of Isaiah 40:31 - "They will soar on wings like eagles; they will run and not grow weary, they will walk and not grow faint". "40" is taken directly from Psalm 40 - "I waited patiently for the Lord; he turned to me and heard my cry. He lifted me out of the slimy pit, out of the mud and mire; he set my feet on a rock and gave me a firm place to stand. He put a new song in my mouth, a hymn of praise to our God. Many will see and fear and put their trust in the Lord." (References taken fron New International Version of the Bible) "40" was used for several years as the closing song at U2 concerts, and the words "How long to sing this song?" were echoed each night by fans as they left the show.

During the tour to promote 'War', several live recordings were made which were later to appear as the live mini-LP, 'Under A Blood Red Sky'.

Go on to the Under a Blood Red Sky page...

"And your heart beats so slow through the rain and fallen snow, across the fields of mourning lights in the distance" - A Sort of Homecoming