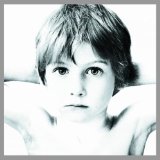 Boy album cover (UK version)
Track list: I Will Follow, Twilight, An Cat Dubh, Into The Heart, Out Of Control, Stories For Boys, The Ocean, A Day Without me, Another Time Another Place, The Electric Co., Shadows And Tall Trees.

'Boy' was the first LP to be released by U2. It came out in October 1980, and received promising reviews from the music press. Despite this, its success in terms of sales was limited because as an emerging band, U2 could not yet rely on legions of fans to propel their records to the top of the charts. In fact on its release, 'Boy' failed to enter the British album charts and only reached number 63 in the US - although that was a promising performance for such a new band. There's no doubt that the band's popularity on college radio stations gave them a real boost at that stage of their career.

'Boy' was recorded in Windmill Lane Studios in Dublin in the Autumn of 1980, under the supervision of producer Steve Lillywhite. Many of the songs that appeared on the record were reincarnations of the songs that U2 had been performing regularly in their live sets, for example 'Out of Control', 'Twilight', and 'Stories For Boys'. Others such as 'The Ocean' and 'An Cat Dubh' were literally written in the studio and recorded within a few minutes.Edge said at the time that the band had recorded songs that they felt would fit together to make something that would be greater than the sum of its parts, that would work as a whole.

The record had a really positive, optimistic feel to it that was at odds with a lot of the material coming from the more cynical british bands of that era. Bono declared that the picture of the child on the cover (actually a boy named Peter Rowan, a brother of Bono's good friend Guggi) was a very important image. It was taken by a photographer named Hugo McGuinness and the eventual sleeve was designed by Steve Averill, a friend of Adam's who was in the graphic design business at the time. (Steve would go on to work on many more U2 album covers.) It signified the beginning of something new for the band, while also symbolising the childlike innocence and trust that U2 seemed to display. Unfortunately the cover photo had to be changed to a band picture for the American market, where it was feared that some would interpret the image as a symbol of paedophilia. Despite this, some unaltered copies entered the US on import, and led to U2 finding a largely gay audience in the beginning. The original cover was eventually restored.

U2's first ever record (the U23 EP) featured 2 tracks (Out of Control and Stories For Boys) that were eventually to appear on Boy, while A Day Without Me and I Will Follow were also released as singles in late 1980. Twilight also featured as a B-side to Another Day, which itself did not appear on any LP.

From the launch of this first LP, Bono had high hopes that it would be the launching pad for bigger things. On the strength of this first release, U2 secured a deal with Frank Barsalona of Premier Talent in the United States - someone who had previously been responsible for booking acts such as Bruce Springsteen and Led Zeppelin. This backing from such a prestigious source led Bono to predict that U2 would break America like no British band had for a long time. Such self-belief was a very important factor in the band's road to success.

Go on to the October page...