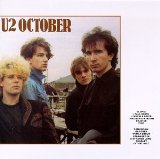 October album cover
Track list: Gloria, I Fall Down, I Threw A brick Through A Window, Rejoice, Fire, Tomorrow, October, With A Shout (Jerusalem), Stranger In A Strange Land, Scarlet, Is That All?

'October' was recorded in Windmill Lane Studios in Dublin and released in October of 1981, just 12 months after 'Boy' announced the arrival of U2. In that time the band had grown in their respective musical abilities, and 'October' was proof that their style had moved on without sacrificing their distinctive sound. Produced again by Steve Lillywhite, Edge's guitar work was still the backbone of this record, while Larry's drumming and Adam's bass became more varied and experimental. Bono's singing retained the youthful vigour of 'Boy', while also displaying a wide range emotions while touching on subjects such as the death of his mother (Tomorrow).

The Christian beliefs of Bono, Larry and The Edge had a strong influence on this record. From the obvious spirituality of Rejoice, to the more subtle meaning behind songs like I Fall Down and October, U2 show themselves to be people of deeply held religious convictions (with the obvious exception of Adam, who has never embraced the faith of the other 3). At the time of October's release, some people viewed it with suspicion due to its spiritual nature. They feared that U2 were deserting mainstream music to become another "Christian band" with limited appeal to the casual listener. Fortunately, the band's ability to incorporate elements of their faith into their music without 'preaching' to their fans meant that they appealed to a broader section of the record-buying public.

Even so, 'October' had a mixed reception from U2 fans. It reached number eleven in the UK charts, thanks in part to the One Plus One scheme that was being run by Chris Blackwell, the head of Island Records. This involved releasing cassette versions of albums that had the music on one side only, thus leaving the other side free to tape something else on. This was a swipe at the major record companies who were running the 'Home taping is killing music' campaign, while themselves making money from the sale of blank tapes. Fire and Gloria were released as singles, but neither made a big impact on the charts. In fact Bono was later quoted as saying that U2 must be the only band to appear on Top Of The Pops (with Fire) only to see their single drop down the chart the following week. The band themselves were not overly concerned that there were those who were disappointed, to say the least. It was obvious even at this early stage that U2 were not a band to rest on their laurels. Their music was set to evolve continually, with each LP being distinct from the others in terms of style, but always retaining that certain something that defines U2.