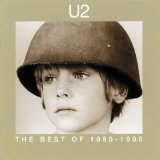 Best of 1980-90 album cover
Track List:Pride (In The Name Of Love), New Year's Day, With Or Without You, I Still Haven't Found What I'm Looking For, Sunday Bloody Sunday, Bad, Where The Streets Have No Name, I Will Follow, The Unforgettable Fire, Sweetest Thing (The Single Mix), Desire, When Love Comes To Town, Angel Of Harlem, All I Want Is You, October (hidden track).

It was decided in 1998 to release a couple of albums which would chronicle U2 to date at that time. This was to take the form of 2 separate 'Best Of' releases - one covering the years 1980-1990, and the other 1990-2000. The first came out in March 1998 and included a limited edition CD of b-sides from those early singles. The second of these LPs is yet to appear - latest rumours suggest that it will be released next year (2002) to coincide with a possible outdoor leg of the Elevation tour.

There are a couple of notable omissions on this CD, for example 'Two Hearts Beat As One' does not appear; neither does 'A Celebration'. The first of these is the more surprising, as Bono has gone on record as saying that he does not consider 'A Celebration' to be a "complete" U2 song. Early material is sadly under-represented, as 'I Will Follow' is the only song from Boy to be included, and there appears to be none at all from October. (In fact, if you let disc 1 play on after the end of 'All I Want Is You' you will hear the title track appear after about a minute of silence. I hadn't even noticed this, so thanks to James for pointing that out to me!). Perhaps more surprising is the fact that the single version of 'Sweetest Thing' is on the CD, even though it was not actually released until 1998. The original version (which first appeared in 1987 as the b-side of Where The Streets Have No Name) is also included on the bonus CD of b-sides, which is useful for comparison purposes. Most fans consider the original the better of the two versions.

Many of the songs which feature on the bonus CD are original U2 compositions, which shows just how many songs U2 were writing during the eighties. Several singles at the time actually had 2 new songs as b-sides, for example With Or Without You included both Luminous Times (Hold On To Love) and Walk To The Water. Many of these songs were of very high quality - one that I would pick out as a personal favourite is Hallelujah Here She Comes, the flip side to Desire. The Rattle And Hum singles also saw the use of cover versions as extra tracks. All I Want Is You contains U2's own rendering of Unchained Melody and a particularly enjoyable rendition of Everlasting Love.

This CD brought a new and younger audience to U2 and gave them the opportunity to listen to much of their best work in one go. Music fans who had been too young to appreciate songs like New Year's Day and Pride first time round, heard songs like these and realised their worth. Hopefully volume 2 of the 'Best of U2' will do the same for yet another generation of fans.

Go on to All That You Can't Leave Behind page...