Under a Blood Red Sky Album 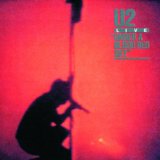 Under a Blood Red Sky was released in November of 1983, and took its name from a line in New Year's Day - "Under a blood red sky..a crowd is gathered, black and white". It remained on the UK album charts for a record-breaking 4 consecutive years. It was officially designated a 'mini LP', which meant that it was both shorter and cheaper than a full-length album. This may have contributed in part to the record's massive popularity, as it provided an easy way for new fans to acquaint themselves with the band's work to date. This was the first U2 record that I myself bought, so it has always had a special meaning for me. It was around Christmas 1983 when a school friend (thanks a lot Colin!) recommended that it was worth a listen, and I haven't looked back since.

Having always primarily been a live act, releasing a live LP seemed the obvious thing to do. The songs were recorded during the tours of the spring and summer of 1983 - 11 O'Clock Tick Tock was recorded in Boston, Massachussets on May 6th, Gloria and Party Girl in Denver, Colorado at the famous Redrocks venue on June 5th, while the remainder were taken from a show for German television (Rockpalast '83) on August 20th. The record was produced by Jimmy Iovine, while the band's Denver concert was also released on video along side the LP, which captured the atmosphere of the show very well despite poor weather conditions on the night. (If you think that Edge's guitar playing in Party Girl is a little shaky to say the least, remember that both he and the guitar were soaked through with rain.)

Some unexpected controversy was caused by the improvised inclusion of a few extra lines in The Electric Co. when Bono added words from two other songs - 'America' from West Side Story, and Send In The Clowns. This turned out to be a violation of copyright, and the lines had to be edited out of later copies of the album. My own vinyl version contains the lines, but my CD version which was bought years later, does not. However, the rarity value of the early records is debatable, since many thousands had already been sold before the change was made. In fact, most U2 fans I know possess the original unedited version.

This record marked the end of an era for U2 in some ways. The upcoming fifth LP seemed like a good time to consider a change in direction, before the band stereotyped themselves as just another guitar-based rock band. The question was: how would the fans react to such a change?

Go on to the Unforgettable Fire page...

"One day I'll die...the choice will not be mine. Will it be too late? You can't fight it" - Out of Control