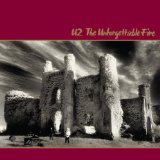 The Unforgettable Fire was the first of U2's studio LPs not to be recorded entirely at Windmill Lane in Dublin. In an attempt to produce a different type of sound, a few rooms in Slane Castle were turned into temporary studios by producer Brian Eno and engineer Daniel Lanois, who had been chosen to produce the record. (The picture on the LP cover is actually not of Slane, but of Moydrum castle in County Westmeath, Ireland.)

The choice of Brian Eno for producer was unexpected to say the least, but the band had made a conscious decision to change direction away from the standard guitar/bass/drums format, so someone with a new approach was needed to oversee the making of the record. Eno himself admitted that he was not familiar with much U2 material, but together with Lanois it was felt that he could coax the best from the band.

Work on the LP began in May 1984 after a lengthy search to find a suitable venue for the recording. All through that summer songs were reassessed, remodelled, and rewritten. The LP was still not complete by September, but a pre-arranged tour to Australia (among other things) forced the band to finish work and prepare for going on the road. The resulting record was different from anything that U2 had done before, but was still recognisable as U2. Only Pride (In The Name Of Love) harked back to the earlier style, but interestingly this was to give the band their biggest hit to date, and their first to achieve silver disc status. The title track was also released as a single, but didn't achieve the success of Pride.

Perhaps the biggest influence on this record is civil rights campaigner Martin Luther King (about whom Pride and MLK were specifically written). U2 have always been fervent supporters of Doctor King and his commitment to exclusively peaceful protest. As Bono once said, "He loved his cause so much he was prepared to die for it, but never to kill for it". The title track of the album used a string arrangement for the first time on a U2 LP - a sign that the band were experimenting with new ideas. Some other tracks such as Promenade and Elvis Presley And America also have a very experimental feel about them, in fact some say that Elvis Presley And America sounds better when played at 45rpm instead of 33! (For those of you too young to remember vinyl records, LPs were played at 33 revolutions per minute, while singles were played at the faster speed of 45 revs per minute. An LP played at the faster speed tends to make the singer sound like a cartoon chipmunk...)

The song Bad, taken from The Unforgettable Fire, was to become a real U2 standard in the years to follow. Its popularity was boosted by its inclusion in U2's set at the Live Aid concert at Wembley Stadium, London on July 13th 1985. The version performed that day lasted well over 10 minutes, and involved some serious audience participation in the form of Bono pulling girls from the front row and dancing with them on the stage in front of literally billions of viewers. Perhaps more than any other single event, Live Aid catapulted U2 to the top of the major league of rock bands. Their next full length LP was to cement their position as the world's biggest band at that time.

Go on to Wide Awake In America page...

"I see the stars in your eyes - you want the truth, but you need the lies. Like Judy Garland, like Valentino, you give your life for rock 'n' roll" - A Room at the Heartbreak Hotel