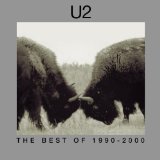 Bonus DVD: Click here for information on this disc which was available during the first week of release.

When first released this album contained 2 CDs (one each for A sides and B sides) and a bonus promotional DVD. After the first week it was only available as a single CD of A sides. Unlike the previous Best Of, there was no hidden track this time, although The Fly was added to discs in the UK and Japan as a way of giving fans something extra because of the high price of CDs in those countries. The same thing happened when The Ground Beneath Her Feet was added to All That You Can't Leave Behind as a bonus track.

Unusually, of the 17 songs on the A side disc (UK version) four are new remixes of existing material and two are previously unreleased. Electrical Storm (Orbit Mix) and The Hands That Built America (from The Gangs of New York soundtrack) are new while Gone, Discothèque, Staring at the Sun and Numb have all been remixed by Mike Hedges specially for this album. Hedges has previously worked with bands likr The Cure, Travis and The manic Street Preachers. Some changes have been made to the lyrics of these songs. For example, Discothèque has lost its distinctive 'boom chas' at the end, while Gone has changed 'What you thought was freedom is just greed' to 'What you thought was freedom just was greed'.

Mysterious Ways, while not actually remixed, does vary slightly from the original album version. In place of the line 'She sees the man inside the child ' we now get something like 'No question, she knows why' in its place. Why it was decided this slight change should be added for the Best Of is unknown.

The B sides CD has received a mixed reception from many fans. While most are happy to see great songs like Lady With the Spinning Head, North and South of the River and Salomé on there, the inclusion of different versions of several of the A sides has upset some. Discothèque, Numb, Mysterious Ways and Electrical Storm all feature on both the A side and B side CDs in this set. While admitting that it's impossible to please everyoine, there does seem to be a consensus that more original tracks would have been preferred on the B sides CD.

If God Will Send His Angels is included in the form of the improbably named Big Yam mix. Big Yam is actually the alias of the remixer, Gerald Baillergeau who together with Victor Merritt makes up the Grand Jury remix team who have already producerd the Grand Jury mix of If God Will Send His Angels. They have also previously worked on songs by the likes of Bobby Brown and rapper Sylk-e Fyne.

Go on to How to Dismantle an Atomic Bomb page...

"Jara sang his song, a weapon in the hands of one whose blood still cries from the ground" - One Tree Hill