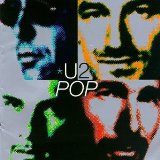 Pop album cover
Track List: Discotheque, Do You Feel Loved, Mofo, If God Will Send His Angels, Staring At The Sun, Last Night On Earth, Gone, Miami, The Playboy Mansion, If You Wear That Velvet Dress, Please, Wake Up Dead Man.

It was three years and nine months after Zooropa that Pop was released. It came out in March 1997 and marked yet another switch in direction for U2. After the disjointed nature of Zooropa, even the very title 'Pop' indicated that this would be something different again. Bono later said that the name had been chosen as an ironic swipe at the sort of pop music that tends to dominate today's charts. In fact after Pop was made, Bono suggested to Larry that they should make a real pop album, which turned out to be All That You Can't Leave Behind.

Certain songs that had been written in the Zooropa era were thought to be unsuitable for inclusion on that LP, and were carried over to appear on 'Pop'. For example, 'If God Will Send His Angels', 'Wake Up Dead Man' and 'If You Wear That Velvet Dress' had all been intended for 'Zooropa', but none of them made it.

Initial work on 'Pop' began in the summer of 1995 when U2 did some preliminary work with producer Nellee Hooper (who had previously worked with artists such as Soul II Soul and Massive Attack) in France. The following autumn at Hanover Quay studio in Dublin, Flood and Howie B came in so the combined influence of the three of them had a strong bearing on how the LP turned out. Flood was what he called 'creative coordinator', supervising the work of Howie and Steve Osborne (one half of the Perfecto remix team, who had previously worked with the likes of Curve, Happy Mondays, and PJ Harvey).

Osborne was brought in mainly as an outsider who could be objective about what the band was doing, while Howie provided varied tracks for the band to sample or to listen to, to give them new ideas to improvise around. Tracks such as 'Do You Feel Loved' and 'The Playboy Mansion' give credit to others (Naked Funk and Clark & McGuinn's 'You Showed Me' respectively) for the influence they had on the record, even though they were not actually sampled themselves. 'Wake Up Dead Man' contains sampling from a Bulgarian piece named 'Besrodna Nevesta' by Nikolai Iankov Kaoufmane, and Last Night On Earth credits 'Trayra Boia' by N. Vasconcelos and D. Milan. Despite the many samples and loops that were used during making of the LP, most of them were eventually replaced by the band playing their own versions of them. Only those which were felt to be too integral to be removed (such as those two) were left.

Around Christmas 1995 Larry had to undergo back surgery which kept him away from recording for several weeks. Even on his return, he had to take things easy while he returned to full health, so the band had to change their way of working to accommodate him, for example making more use of loops and samples. This turned out to be a blessing in disguise, since the band were looking for a more dance-orientated feel to the album anyway. Half way through recording, the band decamped to Miami for a photo shoot but ended up staying for ten days and recording in South Beach studio, from which came the song 'Miami'.

'Please' was written about the Northern Ireland peace process, which was in crisis at the time (isn't it always?). With its soulful lyrics, it soon became a crowd pleaser on the Popmart tour which was launched to promote the LP. Featuring the world's largest TV screen (150 feet (45.7m) by 50 feet (15.2m)), a giant olive on a 100 foot (30.4m) cocktail stick and a huge rotating lemon, it was a spectacularly over-the-top audio visual experience. This would be the last time that U2 would use such a costly stage set. Bono said at the time that the effort involved in keeping such a show on the road was getting out of hand, so future concerts would be more 'back to basics'.