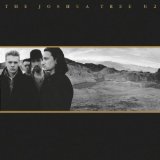 Joshua Tree album cover
Track list: Where The Streets Have No Name, I Still Haven't Found What I'm Looking For, With Or Without You, Bullet The Blue Sky, Running To Stand Still, Red Hill Mining Town, In God's Country, Trip Through Your Wires, One Tree Hill, Exit, Mothers Of The Disappeared.

In the Autumn of 1986 U2 began work on their seventh LP in Windmill Lane Studios, Dublin. Brian Eno and Daniel Lanois had been retained to produce this latest album, but Steve Lillywhite was brought in to mix a few tracks in January 1987 after the recording had been completed.

Originally the LP was to be called 'The Enduring Chill', but the name 'The Joshua Tree' was chosen after the band took a trip to the Death Valley area of California where Joshua trees are common. The whole desert image was consciously chosen for its spiritual and mysterious qualities, which it was felt would complement the album perfectly. Bono actually compared the desert landscape to many European town centres which are becoming ghost-towns in the present day. The photography that accompanied the album added to the already widely held impression that U2 were a humourless bunch of individuals who took themselves far too seriously. Stern facial expressions and barren desert landscapes served to reinforce this belief. However, as Bono is fond of pointing out, U2 don't take themselves seriously, but they do take their music seriously.

The initial sessions for the LP took place in a large house on the outskirts of south Dublin. Some songs such as With or Without You were finished fairly quickly, but others such as Where The Streets Have No Name took an age to get right. The main problem with 'Streets' was that it was actually written for live performance, and it proved difficult to record a satisfactory version of it in the studio. At one point brian Eno even considered wiping the entire backing track in an effort to make the band start again from scratch.

After the first month or so of working on the album, Bono traveled to El Salvador where he met the 'madres'. These were women whose children had been imprisoned or murdered by the military regime in the country, but who continued to campaign for information about them. Bono's experiences there provided the inspiration for Mothers Of The Disappeared and also Bullet The Blue Sky. The music for 'Bullet' came from a jam session with Edge, Adam and Larry, and when Bono returned from his trip, the aggressive nature of the piece was exactly what he was looking for to go with his newly written lyrics about what he had seen.Since the Conspiracy of Hope tour in 1986, U2 had been strong supporters of Amnesty International who are heavily involved in working to free political prisoners. The Joshua Tree tour programme was the first to carry an article on the work of Amnesty, and an invitation from the band to join.

The last three songs on the album form what Edge has called a 'suite about death'. One Tree Hill was written about Greg Carroll who had been a member of U2's tour crew for 2 years when he was killed in a motorcycle accident in Dublin in 1986. The band had first met him on a hill outside Auckland, New Zealand which was known as One Tree Hill. On its release, Bono actually dedicated The Joshua Tree to Greg's memory. Sadly the tree on this particular hill has since been the victim of several acts of vandalism. The second part of this 'suite' is Exit, which had a working title of The Executioner's Song. A dark and intense piece, it was cited in the trial of John Robert Bardo who was accused of murdering a young TV actress named Rebecca Schaeffer in July 1989. He blamed the song (unsuccessfully) for driving him to commit the murder. Bono's reaction to this was to suggest that it sounded like a clever lawyer trying to create a novel defence. The 'suite' and the album finish with 'Mothers', a haunting piece about the madres Bono had met in El Salvador.

The Joshua Tree was released on 9th March 1987. It was the fastest selling album in UK chart history. It would go on to hit number one in 22 countries, and by the end of 1987 it had sold over 12 million copies. On the day of its release, U2 made a surprise appearance at a record shop named Makin' Tracks in my hometown of Belfast, Northern Ireland. The store had opened specially at midnight on Sunday night to sell the first copies in the early hours of Monday morning. I had planned to go down for this opening myself, but changed my mind when a DJ on the radio announced (wrongly) that the release date had been put back a week, to March 16th. Thanks to that misinformation, I missed out on what will probably turn out to be my one and only chance to meet U2. Grrr!

Go on to the Rattle and Hum page...

"There's no race - only the prize. There is no tomorrow - only tonight" - Stateless