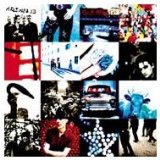 Achtung Baby album cover
Track list: Zoo Station, Even Better Than The Real Thing, One, Until The End Of The World, Who's Gonna Ride Your Wild Horses, So Cruel, The Fly, Mysterious Ways, Tryin' To Throw Your Arms Around The World, Ultra Violet (Light My Way), Acrobat, Love Is Blindness.

At the end of the 1980s - and I mean right at the end ie at midnight on 31st December 1989, U2 were performing at The Point Depot in Dublin. During the show, Bono announced that it was "time to go away and dream it all up again", which some feared was a sign that U2 could be about to call it a day. Such fears were groundless though, and in November 1991 Achtung Baby hit the shelves. The title, something it was thought no-one could possibly take seriously, was a reference to the Mel brooks spoof 'The Producers' which was about staging a musical about Hitler (of all people). 'A Cruise Down Main Street' and 'Fear of Women' had earlier been rejected as being too pretentious (!). The cover for the LP ended up as a montage of many photographs, but at one stage the possibility of using a nude picture of Adam and calling the LP 'Man' was seriously considered. The record company was understandably relieved when that idea was shelved, but it did in some small way live on, as a miniature photo af a nude Adam did make it onto the inside of the sleeve.

Achtung Baby was recorded in the Hansa studio in Berlin which was at one time a Nazi ballroom, and latterly the venue for the recording of albums such as David Bowie's 'Heroes'. Work on the album did not go smoothly. Edge later said that the magic just wasn't there, which created a tense atmosphere and friction between the band members as well as the producers, Flood and Daniel Lanois. The main problem was that the band had split into two camps over which direction they should take with the new album. Bono and Edge had spent the previous few months listening to alternative, rap, electronic and dance music, and felt that they should experiment with these newer styles. Larry and Adam on the other hand, favoured a more conservative style more in keeping with the band's previous work. The upshot of all this was that the four members of U2 found it hard to agree on what songs should be included on the new record. Splitting up was a distinct possibility at that time, as all four agreed that they would rather sacrifice the band for the sake of their friendship than the other way round. brian Eno was drafted in to sort things out, and with his encouragement and patient manner, he was able to produce order from the chaos.

After abandoning the Berlin recording sessions and moving back to Dublin, a truce was reached. U2 found that they could still write good songs and get along together at the same time. 'One' in particular came fro a few bars that Edge had worked out, and the rest improvised around. This was songwriting like they used to do it. Achtung Baby would include many of the new influences that Bono and Edge had been so enthusiastic about, but it would still be a recognisable U2 record. According to Edge, the themes of the new LP were love, betrayal, morality, spirituality and faith. He himself was going through a marriage break-up at the time, and his experiences were reflected in the lyrics of several songs on the LP. Bono was non-committal about whether or not he had consciously drawn from the guitarist's situation for his lyrics, but there seems to be a definite link between them.

In early 1991, as work was finishing on the new songs, the Gulf War broke out in the Middle East. Bono and Edge were amazed at the attitude of some of the television coverage of the fighting - many of those in combat seemed to treat the war more like a video game than a serious conflict. This blurring of the line between fantasy and hard reality gave Bono the initial idea for what was to become the ZooTV tour. The constant stream of 24-hour news, shopping, adverts and MTV made possible by cable and satellite TV seemed to blend together in a way that made one barely distinguishable from the other.

Achtung Baby gave U2 their second UK number one single, 'The Fly', while other releases ie Mysterious Ways, Even Better Than The Real Thing, Who's Gonna Ride Your Wild Horses and One also achieved chart success. 'One' was released as an AIDS benefit single with three separate videos, one of which featured U2 in drag and earned Adam the nickname 'Madam Clayton'.

The tour that developed from this was an audio-visual extravaganza to say the least. Giant video screens surrounded the stage and beamed out ZooTV images and messages in a sensory overload of information. Phrases such as "Everything you know is wrong", "Watch more TV" and "Freedom is slavery" flashed hypnotically from the stage in between Bono actually watching local TV using a remote control to flick restlessly between channels. Some observers suggested that there were more sinister hidden messages hidden among these images (in particular, it was pointed out that the sentence "Bomb Japan now" could be spotted if you looked carefully). This was widely dismissed as mere paranoia. However, there was some controversy in Germany due to the decision to use footage from Nazi propaganda films ('Olympia and 'Triumph Of The Will' by Leni Riefenstahl) during the intro to the show. Similarly, during the live performance of 'Bullet The Blue Sky', the burning crosses referred to in the song appeared on the video screens before metamorphosing into burning swastikas. The fact that the display of Nazi symbols is illegal in Germany made this a potentially dangerous move, but the audiences took it in the spirit in which it was intended, ie anti-fascist.

During a break in the mammoth ZooTV tour, U2 recorded more songs which were to become their next LP, Zooropa.

Go on to the Zooropa page...

"A man takes a rocket ship into the skies. He lives on a star that's dying in the night, and follows in the trail the scatter of light" - In a Little While