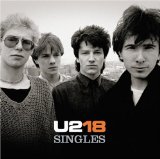 U218Singles album cover
Track List: Beautiful Day, I Still Haven't Found What I'm Looking For, Pride (in The Name Of Love), With Or Without You, Vertigo, New Year's Day, Mysterious Ways, Stuck In A Moment You Can't Get Out Of, Where The Streets Have No Name, Sweetest Thing, Sunday Bloody Sunday, One, Desire, Walk On, Elevation, Sometimes You Can't Make It On Your Own, The Saints Are Coming, Window In The Skies

Vertigo: Live From Milan (Bonus DVD): Vertigo, I Will Follow, Elevation, I Still Haven't Found What I'm Looking For, All I Want Is You, City of Blinding Lights, Sometimes You Can't Make It On Your Own, Miss Sarajevo, Original of the Species, With or Without You

U218 Singles is the nearest thing to a 'Greatest Hits' compilation that U2 have released. 16 of the 18 tracks are well known songs from their back catalogue while 2 bonus tracks were also included: The Saints Are Coming and Window In The Skies, both of which were released as singles in late 2006/early 2007. Both were recorded at Abbey Road in London in September 2006 under the supervision of producer Rick Rubin. The Saints Are Coming was a cover of a 1978 song by punk band, The Skids and was recorded in collaboration with Green Day. It was released in aid of Music Rising, a charity set up by Edge in partnership with producer, Bob Ezrin and Gibson Guitars CEO, Henry Juszkiewicz in the wake of Hurricane Katrina. The song's live debut was at the reopening of the Louisiana Superdome on 25th September 2006, when the New Orleans Saints played the Atlanta Falcons.

The inclusion of two new songs on what is basically a 'greatest hits' album irritated some long time fans who felt their loyalty was being abused, since in order to get the new tracks, they would have to buy 16 others that they in all probability already own. This trend seems to have continued with the inclusion of ever more bonus tracks on so called 'limited edition' releases. Interestingly, these limited editions are often available on the likes of ebay.com at a fraction of their original cost, not that long after release. It seems their collectability is not quite what fans would like to think it is.

While this collection covers U2's entire career to date, several of their albums are not represented, namely October, Zooropa, and Pop. 'I Will Follow' from Boy is included only as a bonus track on the UK version of the album.

The bonus DVD was available with the deluxe version of the album and featured 10 songs recorded at the San Siro stadium in Milan on 21st July 2005.

Go to No Line On The Horizon page.

"When you stop seeing beauty, you start growing old. The lines on your face are a map to your soul" - Summer Rain